Metro trains in Bangalore for Purple and Green Line runs as per the below schedule:

Monday to Friday except 2nd or 4th Saturdays of the month

In case there is any surge in travel demand, additional trains from select metro stations will be operated.

The first phase of Bangalore Metro was started in the year 2011. The second phase is still under construction. There are 42 stations in the first phase in two routes - the purple line and the green line. 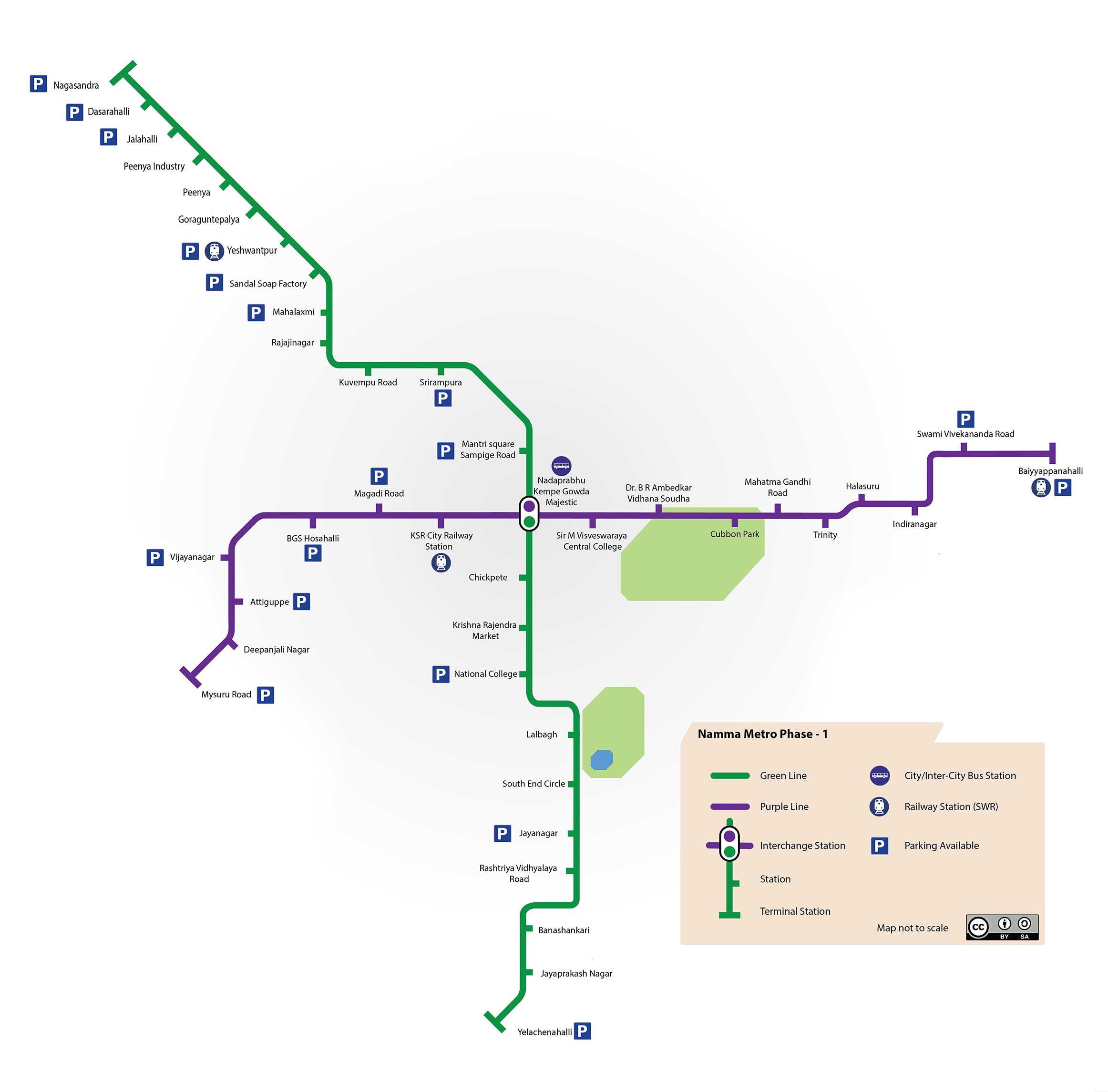 What time does Bangalore Metro start?

Considering the lockdown situation, Bangalore Metro starts at 8:00 AM (Monday to Friday) and 10:00 AM on Sundays, General Holidays, 2nd and 4th Saturdays.

Is Metro available in Bangalore tomorrow?

Is Metro Operational in Bangalore?

Bangalore Metro is partially operational. Due to the COVID-19 situation, lockdown has been imposed and as a result Bangalore Metro service is limited.

Is it Safe to travel by Metro in Bangalore?

Many people are reluctant about travelling on public transportation, but experts have confirmed that the risk is negligible. In fact, working at an office which has been open for months poses a greater health danger than using Namma Metro!

Yes, the Nagasandra-Silk Institute (Green line) is open. The first train starts from 8:00 AM and the last train is at 8:00 PM.

Yes, the Baiyappanahalli-Mysuru Road (Purple line) is open. The first train starts from 8:00 AM and the last train is at 8:00 PM.

What time does Bangalore Metro start on Sunday?

Bangalore Metro starts at 10:00 AM on Sunday (this is because of the COVID-19 Pandemic Lockdown scenario).

Is Metro Card compulsory in Bangalore?

Bengaluru Metro rail has made it compulsory for commuters to use their recharged smart cards loaded with money at least once in the initial seven days after a recharge or balance amount will relapse.

What is not allowed in Bangalore Metro?

The list of things not allowed in Bangalore Metro includes dangerous items like arms, ammunition and explosives. Sharp objects are also banned from the metro as well as tools that do not adhere to specifications. Flammable materials such as gasoline or matches cannot be carried on trains either nor can offensive articles including unsealed meat and fish which fall under this category. Pets too cannot enter these spaces because they may disturb other passengers.

Can we carry alcohol in Bangalore Metro?

Bangalore Metro has banned alcohol. New rules for passengers of Namma metro include no liquor bottles or packets. The recent change is a part of the fire and safety measures taken by BMRCL, Bangalore's metro railway that manages public transportation in Bengaluru city.

Yes, cash is accepted at all the Namma Metro staitons' ticket counters.

How can I travel in Bangalore Metro?

Those traveling on the Bangalore Metro usually have the option of purchasing Smart Tokens or Smart Cards. However, token sales at counters are suspended due to COVID-19 pandemic. To purchase a single trip smart card instead, head over to one of the ticket counters and vending machines.

How much is a 30 day Metro pass in Bangalore?